There will be a recital by Meirion Wynn Jones on the organ of St Aaph Cathedral on Wednesday September 6th at 7:30pm. Go to NEWS for more info.

Sacred Wales - vote for St Dyfnog's! (link on the right!)

(If you can't see the link, press CTRL & F5 to refresh your screen.)

St Dyfnog’s has been named as one of the 50 most beautiful and historic churches and chapels in the National Churches Trust’s Sacred Wales (Cymru Sanctaidd) competition. Members of the public now have the chance to vote for their favourite.

People can vote online at www.sacredwales.org.uk  until 31 August 2017. The winning church or chapel will be announced on 28 September 2017 and will receive a Sacred Wales (Cymru Sanctaidd) trophy, together with a cheque for £500.

You can vote from a pc, tablet, iPad or Smartphone. Go to www.sacredwales.org.uk - you will see a photo of each church or chapel that’s on the shortlist of 50, and you can click or tap the photo for more information about the church shown. Under the photo you’ll find a number next to an eye (the number of times the information about that church has been viewed) and another number next to a heart (the number of votes the church has received so far). To vote for St Dyfnog’s, click or tap the photo of the church, which will take you to a red and white notice which says “Vote for this church or chapel”. Click/tap there, and you’ve voted!

There's also a direct link on the top right corner of this page!

You have until August 31st to vote - encourage your friends to vote, too!

On Sunday 2nd July Denbigh Mission Area joined with Aled Mission Area for a pilgrimage from Llannefydd to Llansannan. Go to NEWS for more. 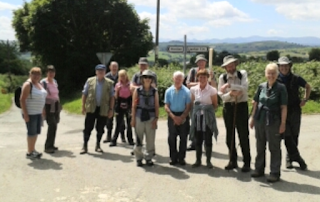 February encompassed almost every type of winter weather imaginable, from warm spring like sunshine to raging storms we saw all manner of weather conditions, we even finished the month with a flurry of snow. The damage caused by Storm Doris was immense and it was a sober reminder of the power of nature. Go to NEWS for more.

Happy New Year, the start of a New Year means a new beginning and we look forward with interest and with hope to all 2017 will bring. This time of year is always a time of looking forward and looking back, giving thanks for the events of the past year and looking forward to the promise the New Year holds.

2016 brought about several major changes, particularly on the political front, changes that will impact on Britain’s future in Europe and in the World. On a personal level for most of us 2016 will have been filled with a mixture of joys and sorrows. Things that we worried about at the start of the year will have paled into insignificance by the end of the year and we place our trust in God as 2017 begins.

Are you a worrier? Possibly we all are to some extent, but more often than not the thing we worried about never happened and when the unexpected does happen then we are so busy dealing with the situation there is no time to worry. The Bible tells us not to worry ‘Therefore, do not worry about tomorrow…….’  We know we can’t add a day to our lives by worrying about things, and yet it is something that we find very hard to lay to one side.

I remember someone saying to me ‘Oh Dad’s such a worrier, he worries about everything and if he hasn’t got something to worry about he worries about what he may have forgotten that he should be worrying about!’ We may smile but maybe there is an element of truth in that for us all.

Look at the birds of the air, Jesus says, consider the lilies of the field. (Matthew 6:25-34) Jesus says enjoy this day which God has given you. Jesus was be able to live in the present, even though he knew he was on a journey that would ultimately lead to the cross, he didn’t spend his life worrying about the eventual outcome, he put his trust in God and got on with the mission God had given him.

Fuller versions of the stories on this page can be seen on the "NEWS" page, where you can also download previous newsletters.

Much of the prayer of the Church we do together, and this is reflected in much of our regular services week by week. However our own individual prayers are important too and whether you are a child, young person or an adult, prayer is easier than you might imagine - millions of people of every age pray every day!

Pick up a leaflet in church, or click HERE to download it (right-mouse and open in new tab).

The church is generally open every day during daylight hours. If you are travelling some distance to visit St Dyfnog's, or if you are a large group, it is as well to telephone in advance in case there is any special event taking place: our churchwarden, June Hughes, will be able to advise. Please call her on 07493 079305. June is also happy to offer guided tours of the church, and a commentary on the Jesse window, if you wish.
We look forward to welcoming you to St Dyfnog's.

A note from the webmaster

An interesting website is one that goes on evolving. If anyone has ideas about information which could usefully be included here, or you feel I’ve got something wrong, please let me know. I can’t promise to implement all your ideas (my technical expertise may not be up to it!) but I will try. You can reach me on kath-b@btconnect.com, or 01745 550488. I hope to be at most Sunday morning services too – do feel free to talk to me there.